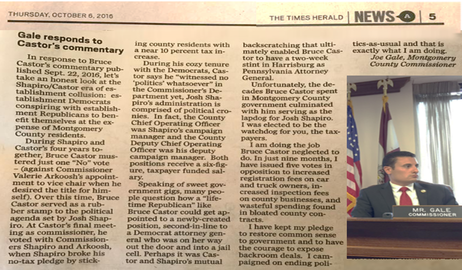 In response to Bruce Castor’s Commentary published Sept. 22, 2016, let’s take an honest look at the Shapiro/Castor era of establishment collusion:  establishment Democrats conspiring with establishment Republicans to benefit themselves at the expense of Montgomery County residents.

During Shapiro and Castor’s four years together, Bruce Castor mustered just one “No” vote – (against Commissioner Valerie Arkoosh’s appointment to Vice Chair when he desired the title for himself). Over this time, Bruce Castor served as a rubber stamp to the political agenda set by Josh Shapiro. At Castor’s final meeting as Commissioner, he voted with Commissioners Shapiro and Arkoosh, when Shapiro broke his no-tax pledge by sticking county residents with a near 10% tax increase.

During his cozy tenure with the Democrats, Castor says he “witnessed no ‘politics’ whatsoever” in the Commissioner’s Department yet, Josh Shapiro’s administration is comprised of political cronies.  In fact, the County Chief Operating Officer was Shapiro’s campaign manager and the County Deputy Chief Operating Officer was his deputy campaign manager.  Both positions receive a six-figure, taxpayer funded salary.

Speaking of sweet government gigs, many people question how a lifetime ‘Republican’ like Bruce Castor could get appointed to a newly-created position, second-in-line to a Democrat Attorney General who was on her way out the door and into a jail cell. Perhaps it was Castor and Shapiro’s mutual backscratching that ultimately enabled Bruce Castor to have a two-week stint in Harrisburg as Pennsylvania Attorney General.

Unfortunately, the decades Bruce Castor spent in Montgomery County government culminated with him serving as the lapdog for Josh Shapiro. I was elected to be the watchdog for you, the taxpayers.

I am doing the job Bruce Castor neglected to do. In just nine months, I have issued five votes in opposition to increased registration fees on car and truck owners, increased inspection fees on county businesses, and wasteful spending found in bloated county contracts.
​
I have kept my pledge to restore common sense to government and to have the courage to expose backroom deals.  I campaigned on ending politics-as-usual and that is exactly what I am doing.